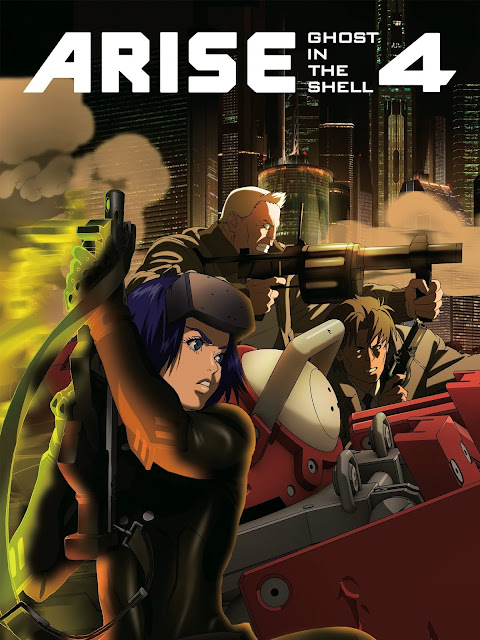 Fourth movie of Ghost in the Shell: Arise.

In the winter of 2028, tensions are rising in New Port City as demonstrations are held concerning the interests of foreign cartels. Aramaki of Section 9 shuts down the city following a tip-off about a Qhardi group being mobilized to target the Yotsubashi Building area following the cyber-contamination at Harimadara months ago. Suddenly the Riot Squad open fire on the citizens and even themselves. Kusanagi and her team suspect a self-destructing Stuxnet-type virus is the cause, possibly released by the terrorist “Fire Starter.” Meanwhile at a VIP ceremony to celebrate a contract between the Kuzan water company and Harimada, a hacked Kusanagi using optical camouflages kills Dr. Zhinzhee Bekka Arr Thied and escapes. In the streets, Batou captures a cyborg girl Emma Tsuda who started the massacre but Colonel Hozumi of Army intelligence wants her for testing for the cyber-virus – a triple package of brainwashing, Ghost infiltration, and false memory creation – but Aramaki refuses. On examination, Tsuda is found to be technical officer in Colonel Hozumi’s command with a special neurochip-type cyberbrain which was hacked by Brinda Jr, “Scarecrow”. Ishikawa’s research shows that Colonel Hozumi is targeting Harimadara, the Vice-Minister and the 501. On the docks, Hozumi shoots Tsuda to silence her, but her and Scarecrow’s Ghosts merge with a Harimadara “multi-legged tank”. When Kusanagi’s team eventually stop it with the help of the Logicomas, the tank bursts open and a cyborg emerges and walks toward the sea. However is destroyed by cannon fire from a Kuzan ship offshore as is Hozumi’s helicopter overhead. With Hozumi in custody, Aramaki tells Kusanagi that she has now been granted special authority by the Minister of Home Affairs to Investigate the high-level hacking virus and any organizations involved.

Code Geass: Lelouch of the Rebellion

Origin: Spirits of the Past