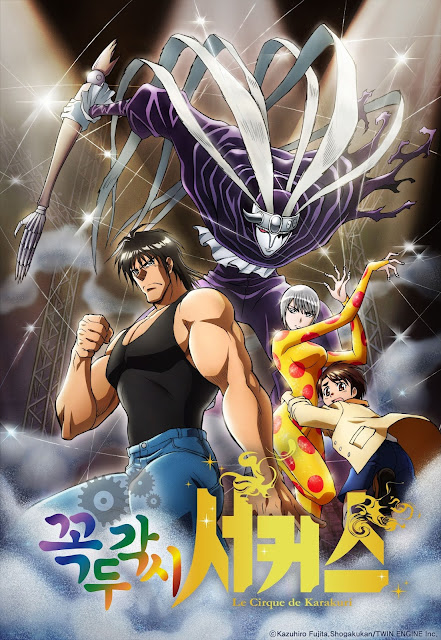 Narumi Katou is a middle-aged man who suffers from the bizarre ZONAPHA Syndrome: a rare and inexplicable disease that causes its victims to endure severe seizures at random, with the only cure being to watch someone laugh. One day, during Narumi’s part time job, a young boy with a giant suitcase fleeing from three adults runs into him. The boy introduces himself as Masaru Saiga, the new owner of the famous Saiga Enterprises following his father’s recent death. However, other members of his family are trying to assassinate him and claim the fortune for themselves.

Determined to save the child, Narumi helps Masaru escape and ends up fighting the pursuers, only to discover that they are sentient humanoid puppets with superhuman strength. As Narumi is about to lose, a white-haired girl suddenly joins the fray and swiftly summons yet another puppet from the boy’s suitcase, claiming herself to be Shirogane, Masaru’s guardian.

Karakuri Circus follows three people from different backgrounds whose fates intertwine and diverge as they unravel the mysteries of an ancient tale of love and betrayal, and the long, ancient battle between humans and puppets.