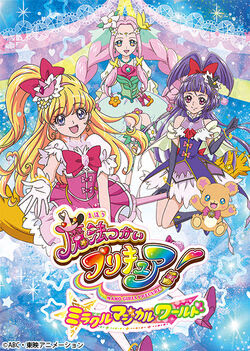 In the human realm, witches and wizards seem to be mere creations of fantasy. Ever the adventurous teenager, Mirai Asahina sets out to disprove this notion by following the tracks of a peculiar shooting star that had fallen the night before. Sure enough, Mirai soon has a chance encounter with Liko—a clumsy witch apprentice who hails from the Magic World, a colorful realm inhabited by magicians.

As if by fate, the appearance of strange villains forces Mirai and Liko to join hands. In doing so, they unleash their strength as a pair of legendary magicians—the “Maho Girls Precure!” Now gifted with unbelievable power, the unlikely duo embarks on an adventure filled with magical spells and powerful gemstones. Along the way, the two girls discover the hidden marvels that tie their individual worlds together.