Home » Adventure » Naruto the Movie: Legend of the Stone of Gelel
A-Z list 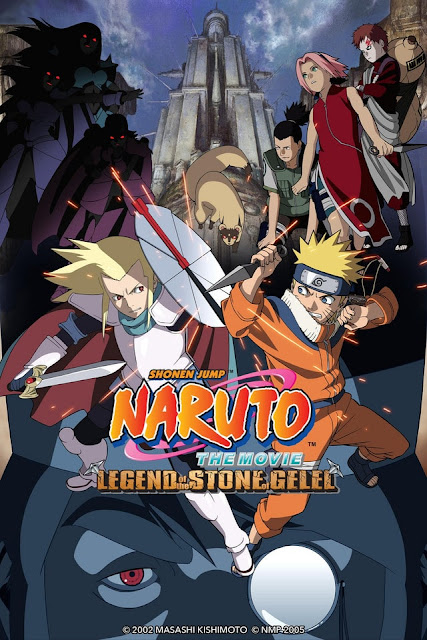 In a tumultuous effort, the Sunagakure ninjas attempt to repel an unforeseen invasion of mysterious armored warriors on the Land of Wind. Shortly afterwards, the same armored troops led by Temujin—a skilled knight of impressive power—ambush Naruto Uzumaki, Sakura Haruno, and Shikamaru Nara, who are on a mission to recover a lost ferret. Naruto and Temujin engage in a fierce fight that ends with both of them falling off a cliff.

Taken aback by their friend’s sudden misfortune, Sakura and Shikamaru witness yet another alarming development: a massive moving structure appears out of nowhere, ravaging any trees and rocks in its path. While Sakura sets off to find Naruto, Shikamaru infiltrates the imposing fortress in hopes of learning more about the critical situation.

Entangled in a relentless conflict, the Konohagakure ninjas join forces with their Sunagakure counterparts to defeat the common enemy. However, amidst the turmoil, a clash between two different visions of an ideal world emerges.