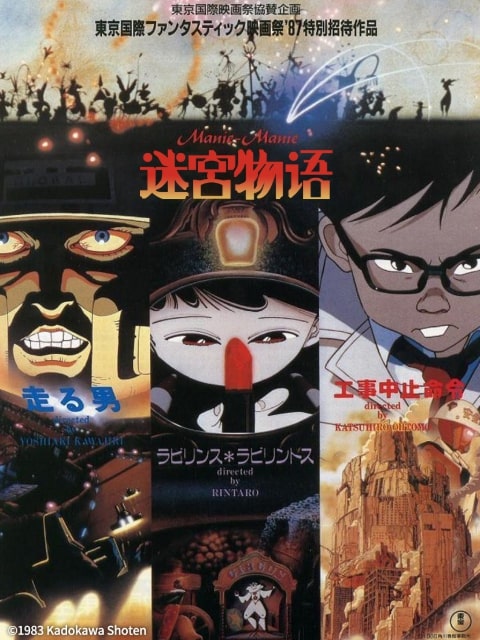 Labyrinth Labyrinthos
While Sachi is searching for her cat, Cicerone, they both fall through a mirror and become trapped in a mysterious, mind-bending labyrinth. They follow a clown’s shadow into the distance, not knowing where it will lead them.

Running Man
Bob Stone is a reporter working on an article about racer Zack Hugh, the ten-year reigning champion of an extremely popular and deadly automobile race. By the time the two meet, Zack’s body and mind are shells of what they used to be. When the next race starts, Bob observes what happens when both man and machine are pushed to their breaking point, and what it takes to be an enduring champion.

The Order to Stop Construction
Salaryman Tsutomo Sugioka is dispatched into the heart of a dangerous jungle in order to halt a construction project after the foreman’s mysterious disappearance. There, he discovers the deadly and uncontrollable world created by the automated construction robots. When the chief robot is resistant to his orders, Tsutomo must figure out another way to stop the project before his company’s financial losses become too great.