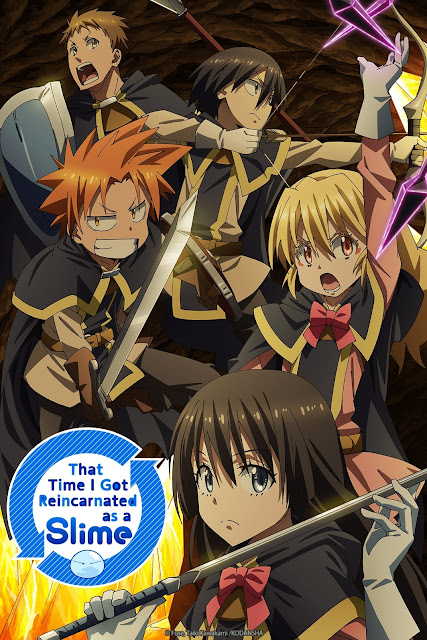 Parent story: That Time I Got Reincarnated as a Slime

OVA 1:
One day, Shuna and Shion are fighting over Rimuru’s squishy slime body as usual. Rimuru figures that giving them each a body double of himself would solve the conflict, but when he imagines some of his other friends asking him to do the same for them, he quickly drops that plan. Then he comes up with the idea to make a cushion in the shape of his slime form. He travels around Tempest to see if his friends know of any good materials he can use, and he learns that a special type of sand found along a lake shore in the forest is exactly what he’s looking for. So he sets out to collect some sand… but a monster is waiting for him by the lake! What’s more, Milim hears about his plan for a picnic and comes racing down from the sky!

OVA 2:
In the midst of his everyday life, Rimuru suddenly realizes that there’s nothing to do for recreation in Tempest. He suggests sumo wrestling as a way for everyone to have fun together, and his friends are immediately on board with the idea. Thus begins Tempest’s first sumo tournament, in which everyone competes enthusiastically in hopes of winning the grand prize! Passionate contests break out not only among Benimaru and the men, but also among women like Shuna and Shion, and even Rimuru ends up joining in!

OVA 3-5:
Rimuru, now a teacher at the Freedom Academy in the Kingdom of Ingrassia, has become involved in the school’s outdoor training event with his class. The outdoor training event is an annual competition in which the students of each class guard the teachers on a journey to a nearby town. Rimuru is assigned to Class A, while his own students in Class S escort the young Tiss-sensei. All the students are eager to show how much their daily training has paid off, but the situation turns around when they’re attacked by thieves!